The London, Midland and Scottish Railway’s mixed traffic, medium powered Class 5, 4-6-0 locomotives were designed by Sir William Stanier.  These highly versatile locomotives were universally known as ‘Black Fives’. Stanier, who had previously been the Works Manager at the GWR Works at Swindon realised that there was a need for larger locomotives and using his experience gained at Swindon took inspiration from the GWR Hall Class locomotives.  Both the Black 5 and Hall locomotives shared similar cylinder arrangements, internal boiler design and had 72 inch diameter driving wheels. Consequently, the ‘Black Fives’ with their 6 feet driving wheels could attain speeds of around 90mph, making them ideal for passenger traffic.
Initially twenty were ordered from the Crewe Works and a further eighty from the Vulcan Foundry, with the numbering starting from 5000.  The first locomotive to be completed was actually engine No. 5020 in 1934 and was built at the Vulcan Foundry, while locomotive No. 5000, the first Crewe built example did not emerge until 1935. The original examples were built domeless with straight throatplace boilers and a low degree superheat. Besides these original orders the LMSR was responsible for the largest single locomotive order ever given by a British railway company to an outside contractor when the company ordered a further 227 ‘Black Fives’ from Armstrong Whitworth & Co in 1936.
Wartime restrictions halted the construction of the Class with No. 5471, built at Crewe being the last produced for five years. In April 1943 production was recommenced with the workshops at Derby, Crewe, and Horwich producing batches every year until 1951.  These post war examples were built with George Ivatt’s forward top feed type boilers.  There were a number of additional detail variations in the locomotives during and after manufacture with modifications introduced in 1948 by George Ivatt, which included changes to bearings and the introduction of Caprotti valve gear.
On 4th August 1968, ‘Black Five’ No. 45212 was honoured by heading up the last steam hauled timetabled passenger train on British Railways.  The following week, on Sunday 11 August the final three ‘Black Fives’ worked the ’15 Guinea Special’ from Liverpool Lime Street to Carlisle, a 315 mile and an almost eleven hour journey.
A total of 842 Class 5 locomotives were built between 1934 and 1952 of which only 5 were named, all after Scottish regiments. Since that time several of the 18 preserved examples of the Class have been named.
Specs: 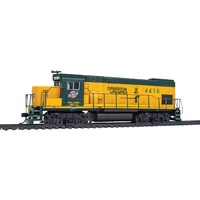