Known collectively as Light Pacifics and nicknamed ‘Spam Cans’, the West Country and Battle of Britain classes were designed as air-smoothed 4-6-2 Pacific locomotives by the Southern Railway’s Chief Mechanical Engineer, Oliver Bulleid. Designed to be lighter in weight than the similar Merchant Navy class, they could be used on a wider variety of routes, including the Kent coast and South West of England. The class were constructed using new working practices and techniques in locomotive construction, this included all-steel welded boilers and the use of steel fireboxes and was due in no small part to the need to ease construction during the wartime and post-war austerity years.
The Light Pacific’s beginnings came from Southern Railway’s order for twenty locomotives in 1941, at that time of an unspecified design, to replace the ageing T9 Class in the West Country. With Brighton Works’ spare capacity being taken up with the manufacture of wartime goods engines, it was to be 1943 before Bulleid proposed a mixed traffic locomotive design, based on his existing Merchant Navy class, but shorter, lighter and with a smaller tender. Building of the new locomotives commenced in 1944 and the first locomotive of the West Country class, 21C101 Exeter, entered service in May 1945, with the last of the first batch of twenty being completed by December that year.
The next ten engines entered service by May 1946 with a further fifteen, ordered before completion of that batch, entering service by October 1946.
The first forty eight locomotives were all named for West Country locations, but with a need for the Southern Railway to improve services on its Eastern Division, the next forty two locomotives were in need of a different naming convention and it was decided to opt for names synonymous with the Battle of Britain. The Battle of Britain class commenced with 21C149 Anti-Aircraft Command, introduced in December 1946 and the batch concluded with 21C170 Manston in November 1947.
That same month, despite ongoing negotiations regarding Nationalisation, the Southern Railway ordered a further batch of twenty locomotives, these being delivered under British Rail’s new numbering system of 34071 to 34090, between April 1948 and February 1949. Whilst many thought this would signal the end of the class, British Rail (Southern Region) surprisingly ordered a final batch of twenty locomotives in March 1949, these being delivered between September 1949 and January 1951.
In 1957, following the successful rebuilding programme of fifteen members of the Merchant Navy class, sixty of the West Country/Battle of Britain class were selected to undergo rebuilding in a similar manner. The classes operated until July 1967, when the last steam locomotives on the Southern Region were withdrawn and although most ended up being scrapped, twenty locomotives were rescued and are now in various states of preservation with the UK’s heritage lines.
Locomotive 21C159 Sir Archibald Sinclair, built at Brighton Works, entered traffic on April 3, 1947, allocated to Nine Elms. Transferred to Stratford in April 1949, a second spell at Nine Elms from May 1949 was followed by a transfer west, to Exmouth Junction, on April 11, 1951. Transferred again on October 10, 1955, this time to Salisbury, the locomotive was rebuilt between February and March 1960, before being withdrawn from service on May 29, 1966.
Maximum curve Hornby 2nd radius + / 438mm+
Specs: 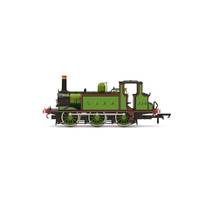