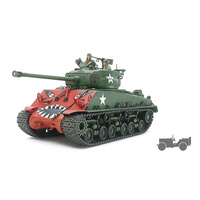 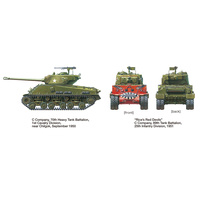 Small but Mighty
The M4A3E8 "Easy Eight" was a smooth-riding horizontal volute spring suspension (HVSS) variant of the Allied workhorse Sherman medium tank. It was an improved threat over predecessors thanks to a more powerful, 76mm gun, and employed a V8 gasoline engine in its welded hull. As perhaps the finest of the Sherman variants it played an important role in the eventual Allied WWII victory, but its service did not end there: When conflict flared again in June 1950, this time on the Korean peninsula, Easy Eights were refurbished and deployed again, taking on enemy T34/85 tanks operated by the Korean People's Army from the invading North, and serving till the armistice of 1953. The distinctive marking pattern shown in the main picture on this page is said to have been employed in an attempt at psychological warfare.

*This interpretation of the "Rice's Red Devils" markings is based upon photographs and contributing research from David Doyle. 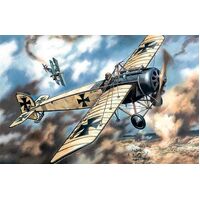